What is the 3D Product Animation Video Development Process?

Why 3D Product Animation, When I Already Have 2D Animations and Images?

What is Virtual Product Modelling? Complete Guide to VPM 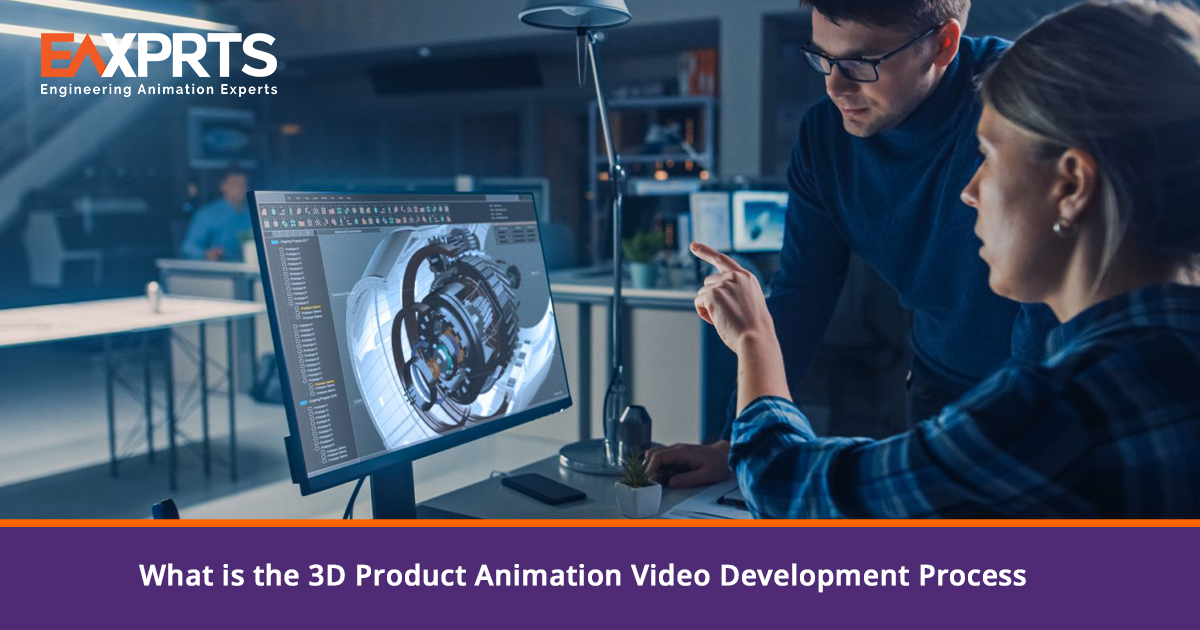 Right from the dawn of civilization, drawing has fascinated human beings as is evident from the cave paintings. With the passing of years, drawings found many expressions through cartoons, caricatures and the visual arts. Technology enabled 2D animation first and later 3D animation, the latter visually more appealing due to realistic presentation. When it comes to mechanical 3D product animations, not only it makes products appear realistic, but also shows in details the process of dismantling and assembly, the inner workings, etc. This makes it not only visually appealing but also technically sound and informative. 3D product animations are also used to design concepts and make early prototypes. The animation video development process is a systematic procedure of video production, which ensures the creation of a high-quality and effective animated commercial.

So how exactly are 3D product animation videos made? For that, one has to understand the complete animation video development process from concept to the finished video, step by step. Regardless of the fact whether the animation is made by an in-house team or outsourced to a professional agency, the steps and the process basically remain the same.

Every project starts as an idea and so is the case with 3D product animation. The idea is to exploit the commercial potential of the product by giving all the information about its applications and advantages in an interesting and convincing manner. Once the idea is understood, the research follows on how best to put it into the animation video so the applications and attributes can be effectively put across for the benefit of the target audience.

The basics in place, it is time to gather data about the product – its parts, functions, how it fits into the overall system – and understand everything that needs to go into the animation video, including what happens to it at the users’ end. The product may be an independent machine or assembly or a part of a machine, or even some consumables like lube oil, additive, welding wire or even metal sections. This is essential to make an impact as there is no room for error here – unlike a film made for entertainment, a product has to work in the real word.

With all the relevant information gathered and assimilated, it is time to begin the crucial task of developing the concept into a script that actually makes the whole video work. After all, it is essentially an exercise in story telling – and telling it convincingly as there is no second chance. One has to get it right the first time. All the work done in the previous two steps has to be put into the script to present it in a simple and convincing manner to make it realistic – as if the action is happening in real time.

After the script is ready, it is time for Storyboarding, which is the process of visualization of how the script will be converted into the animation video. In this a series of storyboards are created that depict the exact sequences of how the story progresses, with models of the product and props used to convey the flow of the scenes. The story board gives an exact idea of how the sequence of scenes unfold in the animation video.

An important aspect of any 3D product animation video is the voiceover. No matter how effective the visuals, an explainer video is incomplete without voiceover – a well-modulated voice, whether male or female, it matters not. Accent and diction are important considerations, as the information conveyed is important and must be delivered in a clear tone. A good voiceover can reinforce the overall message conveyed through the animation, and could be a decisive factor in the final outcome, in terms of the impact it creates.

Now the animation video production begins. With such an elaborate preparation for the project, the animation itself becomes easier. All it takes is to follow the script and adhere to the storyboarding agreed upon, the models/characters all ready by now. Depending upon the simplicity or complexity of the project, an appropriate animation software is used. Usually a few versions are made so as to get the perfect final result after editing.

The most important phase begins now by putting together the animation sequences to match with the voiceover, background music and the sound and light effects, etc. This is also the time where the client is closely involved in checking and approving the work, and if not entirely convinced, making useful suggestions.

The time to wrap up has come. Based on client reactions and feedback, the revisions or corrections are made and the final result delivered, a culmination of all the work done since the idea was conceived. The 3D product animation video is now ready for release.

The importance of 3D product animation cannot be overstated. No company or enterprise today can afford not to promote its business without adapting to the modern digital tools of the internet era. 3D product animation videos are an excellent medium that suits the contemporary trends, with the smartphone becoming an indispensable device in every hand, the added convenience of carrying it everywhere. If a company is confident of doing the animation in-house, well and good. But most do not have such expertise so it is best to outsource it to the professionals. There are many studios and freelance artists doing this and one can look online and find the right one based on the work done by them. The price band has an offering for every budget, as long as the brief is clearly understood. The time to decide is now.

To know more about animation video development process, connect with EAXPRTS! Reach us on [email protected]